Since 1997, Richard Masters has exhibited his artwork in many galleries throughout the country, a record that includes numerous solo, group, and invitational shows as well as over fifty national or international juried exhibitions. A comprehensive listing of the artist’s exhibition activity can be found on his résumé.

Begun in 2009, the Arnot Art Museum’s 3 Americans series takes inspiration from six landmark exhibitions held at the Museum of Modern Art from 1942 – 1963. Curated by Dorothy C. Miller, these exhibitions sought to highlight a broad range of works from a select number of American artists. Like MOMA’s groundbreaking exhibitions, 3 Americans emphasizes differences in perspective and experience. Instead of a large regional survey, however, 3 Americans sets three one-person shows within the framework of a group exhibition. It celebrates the individual artists’ vision while putting them in dialogue with each other.

In April 2021, our friends joined us for a day trip to Elmira to see the show in person for the first time. Later in August, a closing reception was held that was open to the public, the museum’s first such event in 19 months.

Hosted by the Arnot Art Museum in Elmira, New York, this juried exhibition was open to artists living in Connecticut, Delaware, Maine, Massachusetts, New Hampshire, New Jersey, New York, Pennsylvania, Rhode Island, or Vermont. With nearly 500 submissions to review, only work from 66 artists were selected for the show. On March 15, 2019, the artist’s entry, Metropolitan Solstice, was selected Best of Show at the opening reception and awards ceremony.

Curated by Suechung Koh, this show was hosted by Gallery Yonhee, located at the Korean Community Center in Tenafly, New Jersey. The opening reception was held on October 12, 2018.

Two of the artist’s works were selected for this exhibition, which took place at Chelsea’s George Billis Gallery during the summer of 2017. The piece on the left, Tacos y Quesadillas, promptly sold the day following the reception.

In December 2016, the artist and his spouse were invited to show their artwork at the Sylvia Wald and Po Kim Gallery, an art gallery located in the East Village section of Manhattan. The exhibition coincided with the gallery’s annual holiday fundraiser event. 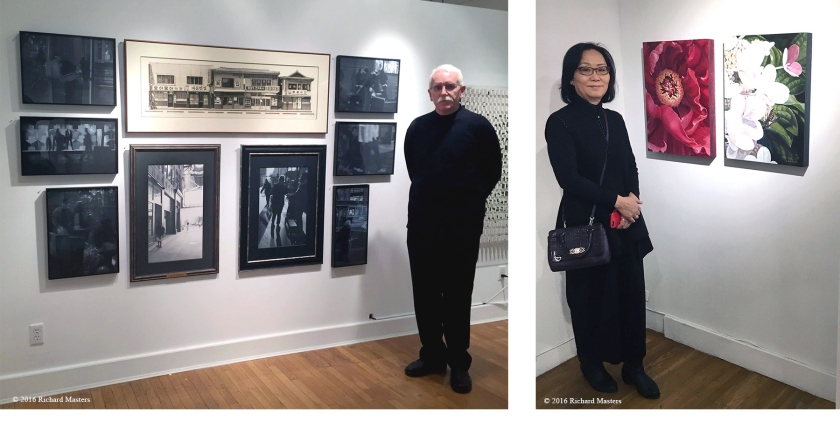 In January 2013, the artist held a solo exhibition on the Simpson College campus in Indianola, Iowa. The show was hosted by Farnham Galleries, a non-profit organization that provides the college and the surrounding community with opportunities to showcase the work of professional artists. The closing reception and gallery talk was held on February 7th.

Richard Masters: As the Worlds Turn

In the fall of 2011, the Iowa State Historical Society hosted an exhibition of the artist’s ten-piece series entitled, As the Worlds Turn. The show coincided with the Iowa City Gallery Walk. It felt good to return to Iowa City and display my artwork in the shadow of my alma mater, the University of Iowa.